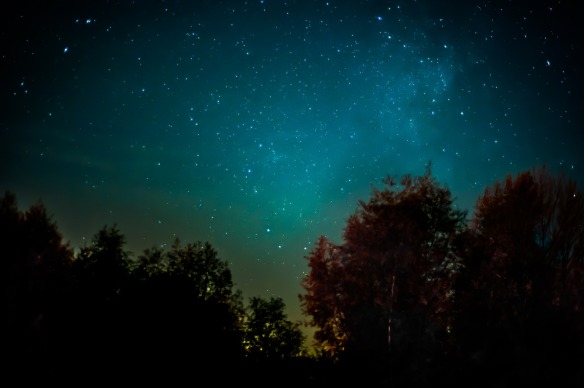 I’m aware that I continue to fail at keeping this Monday morning eNews message short. Believe me, I’m trying. And this time, I won’t let you down. It’s just that there’s plenty unfolding around us to observe, ponder, and share. When it all begins to coalesce, it can get somewhat substantial. And then in my eagerness, when it all starts rolling from my fingers to the keyboard, it’s probably better—saner—for me to just let it run its course, like a boulder rolling downhill. Eventually it’ll come to a stop, but until it does, I’d better stay out of its way.

The thought I had this morning stems from a comment my daughter, Evelyn, made a few days before school started. I’d taken the Wrangler’s doors and top off, and among the five others in my family, Evelyn was the only one who accepted an invitation to go for a late-evening drive. The air was cool. The sky was clean swept of clouds. It couldn’t have been any better.

At one point, we ended up north of town, somewhere between Flint and Linden, which is mostly farmland. As we made our way along the lightless roads, Evelyn leaned back to gaze into the depth of the night sky above us. Again, that particular night offered a sky that was crisp and clear. With barely any light from the city, the stars were easily visible.

Pointing to this one and that one, she wondered aloud to her chauffeur (as best as she could above the wind noise) as to whether they were actually stars or planets. She looked for the North Star—because she knows how to find it in relation to the Big Dipper—and she gave a gleeful cheer when she did.

“It’s awesome how God put all those up there,” she said, capping the moment of discovery. “And He did it in a way so that if we’re ever lost, we’ll always be able to see them and find our way.”

A simple observation, true to anyone who’s ever navigated the ocean’s tides. And yet the words of the pretty ten-year-old girl riding shotgun in the Jeep set a little something more into motion.

On the surface, it seems she meant rather simply that God designed the universe in a way that all its parts move predictably, as though it were a grand engine that, by virtue of its unfathomable mechanics, served to display His power.

While true, her words were deeper still. Evelyn’s observation hinted to the grand presentation twirling above us as being far more a faithful exhibition of God’s thoughtful concern than His power, more a display of His inclination toward love than His creative muscle.

“And He did it in a way that, if we’re ever lost, we’ll always be able to see them and find our way.”

That’s God doing—designing, creating, acting, moving—as He cares for us, as He’s mindful of us. And that, of course, got me thinking on God’s Word, the place where He reveals this mindful love, the place where He refers to the stars as being in place not only for the mechanical governance of night and day, or solely for our delight, but as opportunities to do just what Evelyn and I were doing in that moment—beholding and then recalling His loving faithfulness.

Just off the top of my head, I can point to the obvious instance in Genesis 15:5 when God led Abram (soon to be Abraham) out into a cool evening just like the one we were enjoying. It was there that God encouraged him to behold the stars, and He reminded the childless man of His very important promise—one that would see to countless offspring, ultimately resulting in a most important descendant, Jesus Christ, coming to redeem the world.

I can also think of Saint Paul’s words in 1 Corinthians 15:41-42 where the Apostle points to the moon and stars to help describe the resurrection of all believers in Christ. And knowing the intertwining of the divinely inspired Word, I’ll bet Daniel 7:2-3 wasn’t all that far from Paul’s mind when speaking of such things. Daniel wrote quite candidly of the resurrection at the Last Day: “Multitudes who sleep in the dust of the earth will awake, some to everlasting life, others to shame and everlasting contempt. Those who are wise will shine like the brightness of the heavens, and those who lead many to righteousness, like the stars for ever and ever.”

Beyond these, don’t forget the kinds of things God’s Word shares with us every year at Christmastime and Epiphany, those seasons in the Church Year when we hear words like, “A star will come out of Jacob; a scepter will rise out of Israel” (Numbers 24:17), or we follow along as a luminous attendant in the heavens leads Magi to the Christ child (Matthew 2:1-12).

Perhaps best of all, it means something to us when we hear the Lord Jesus say of Himself in Revelation 22:16: “I am the Root and the Offspring of David, and the bright Morning Star.”

To conclude, if you can find the time, take a moment to look into the night sky. Grab your lawn chair and a favorite beverage, maybe lather up with some bug repellent if necessary, and then kick back in a place where you can see an unobstructed sky. First, look widely. Behold the splendor. Then look closely. See the precision. Ponder these things knowing that the One who put it all there has His divine heart set upon you. He loves you—enough to give His own Son into death that you would have life.

I suppose that’s the better, truer, beauty inherent to the glistening stars.